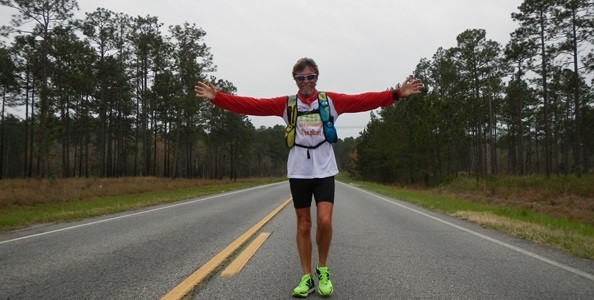 Deep South
(Thanks Lee for prompting this title)
Serge began in a rural setting, surrounded by woods, with few vehicles and Tall Oaks Road was very pleasant until Moultrie. He crossed the town at KM 40 without any problem and it did not make a memorable impression on us. After Florida, which is highly touristic and attracts many American retirees due to the climate, this part of Georgia does not appear to attract tourists. I have to say we drew some attention and questions: Where are you from? Oh, you’re Europeans…
This morning at the starting line I had new Serge. If you look at the photos you will see that he has a new look: cotton T-shirt because the UV and the sun are not so strong and Serge’s skin began to react negatively to the chaffing of his back pack, perspiration and yesterday’s rain. He wears his favorite red bandana, which matches his t-shirt (very spiffy) and he has put on his new Pro Touch 1.0, flashy green running shoes. You can’t miss them on the road. My only regret, he did not shave off his beard! We finished the day on Route 33, heading toward Sylvester, which we will cross tomorrow. We continue to head due north toward Atlanta. The temperature did not exceed 23°C, very reasonable for running 10H.
Serge really enjoyed himself today, as you can see from his video. He did not say that some dogs got loose from their owners and ran around his legs. Even though Serge loves dogs, he is always wary of them because he doesn’t want to get bitten in the calves.
Today I bought an American scale because the European model went home to Normandy. Tomorrow Serge will start the chore of “weighing in,” and now the verdict will be in pounds, not kilos.
Here is a math problem for the students:
Service or filling stations sell gasoline by the gallon and not by liter (like the bottles of water we buy)
1 Gallon = 3. 78 liters
1 Gallon = $1.89
How many dollars for 1 liter
Bonus question: 1 euro = $1.10
How many Euros for 1 liter

Thanks go to those of you who are strong in math; you will help me do my accounting!

The price varies from state to state and from one brand to another.
Diesel fuel is more expensive than gasoline by 10 to 20 cents
The price of accommodation varies too:
In Florida we spent an average of $95 per night (prices ranged from $80 to $130) and Miami is more expensive. Florida is a real money pit for the pocket book.
In Georgia prices for accommodation range between $60 and $100 with the average being $75
For gasoline and accommodation, Georgia is less expensive than Florida. That is the good news for the day.
Did you know, sheriffs are elected by the citizens and not appointed, which was another preconcieved idea I had (see photos).