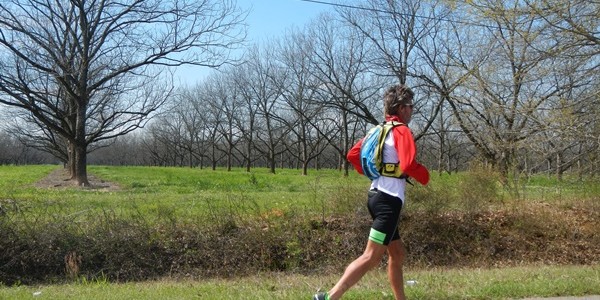 After driving 8 km we went through a town with nice name of Vienna, then the town of Fort Valley at the end of the sages.  In between the two, we see fields, farms, a few woods and stands of trees.  The scenery continues to be rural for our third day in Georgia.

The north-west wind is rather brisk this morning.  Serge put on a second layer for the first time since March 6th, the day we left Miami.  It’s chilly! During the day temperature ranges of 20°C are finished and Serge isn’t winded in the morning.  His body regulates better and does not overheat.

We have not had so many direction changes in a long time.  They break the monotony of long straight lines, even though Serge really likes the long and straight.  At km 58 we reached US 341, with heavy traffic this Sunday afternoon.  The drivers seem to be in a hurry because they exceed the speed limit.  Here there are no kilometers, only miles so, once again, I need my calculator as I do for gallons and liters and pounds (Lbs.) andmm kilos.  On this US 341, the speed limit is 55 MPH, which makes 89 KPH, but the majority of the vehicles drive faster.  What the dickens are the Sheriff and the Police doing?  There are 2 vehicles patrolling in Fort Valley!

The countryside is beautiful in the spring sunshine and we are sorry to see that very often the roadside is used as a garbage dump, in spite of signs saying « Do not Litter, » occasionally with a $500 fine.  It does not seem to keep people from throwing beer and soft drink cans, bottles and fast food wrappers on the roadside.  Sometimes the quantity of stuff is huge.  Either the road maintenance is less efficient than in Florida or in Georgia people are less concerned by the matter; both I suppose!

After yesterday, which was unusual because it was longer than normal due to the fact that we split it in two, we were both tired.  Serge was really fatigued when he reached Fort Valley, probably because there was a head wind at the end of the stage.  It seems that there will be the wind from the same direction tomorrow.  We will stay on US 341 without changing direction, North West, in order to reach the South-West of Atlanta Tuesday evening.