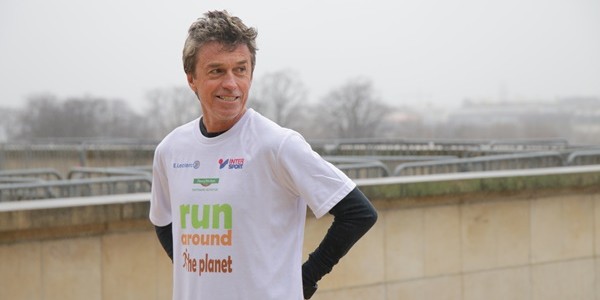 Serge will start the first stage in Paris, without fanfare.  If you would like to run with him, the meeting point is in front of Notre-Dame Cathedral between 10H45 and 11H00.  From there we will take the left bank quay to the Pont de Tolbiac, where we will cross to the bike path on the right bank and head out of Paris.

We will touch 3 departments on Sunday:  Val de Marne, Essonne and Seine et Marne.   We will run along the Seine, see some bucolic spots and go through the Sénart and Rougeau forests.  The stage should finish just South of Melun.

Below is the link showing the details of the 1st stage.  A theme for this stage could be:  Along the Water, since Serge will never be far from the Seine. 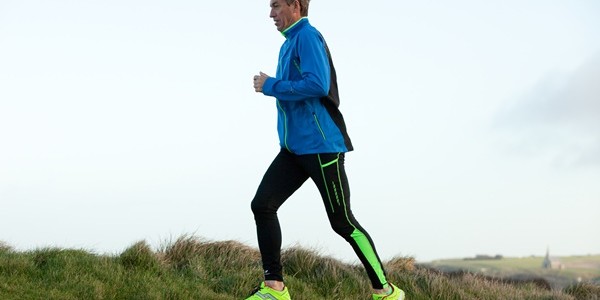 Since June 2015 and the abrupt end of the Run&Row Tour, Serge has not stopped running.  From June 1 to December 31, he has run an average of 200 km per week, with two peaks of two weeks in July and October when he ran more than 300 km per week.

During training, he alternated running and walking, which enabled him to lower his heartbeat rate to 36 per minute instead of 40.

During these 7 months, Serge had only 10 days of rest and he entered a 48H in Kladnõ at the end of July where he ran 314 km.

Since January 1, Serge has been recuperating with 100 km per week, just to maintain his form.  He watches his weight carefully, since he is running less.  He wishes to stay at his preferred weight 61-62 kg.  He combines his race training with daily sessions of sheathing.

Please note that on December 31, 2015, Serge left the house to run at 23H45 and returned shortly after midnight.  It has become a tradition for Serge to be on the road as the New Year starts.  This New Year’s Eve his Excel spreadsheet informed him that he had clocked 200,000 km since he began his running on May 15, 1983. 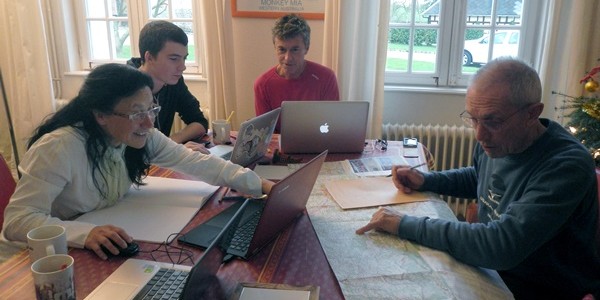 This adventure is unlike the previous races for one major reason:  the time available to prepare it.  The idea for this new challenge was a last-minute thing that left us only 2 short months to get ready for a 14 month expedition.  Like all ideas, this one evolved and changed, so time was wasted because developing such a project never goes in a straight line. For example, the choice of an itinerary was modified at the end of December, even though we had all worked on the previous itinerary.  The time and energy spent on itinerary number 1 was lost and could not be recuperated.  Excess time is something we do not have.  What we do have is energy and this energy takes the form of our precious team, who gives us a great deal of help.  Not wanting to be repetitious, I suggest you have a look at the presentation of this team on the new website, in the menu Challenge, under “Team”.

Without doubt, this is the first time that Serge has been so totally involved in the preparations of one of our adventures.  From headaches to tired eyes, he has not spared himself.  As for Laure, she is at a point where she does what she can, which is to say little.  Between her work and the death of her father on January 1 she has not been available and has gone through moments of great distress.  It has not been an easy time, especially because it is the first time that Serge and Laure will not be together!

The countdown has begun almost without our realizing it.

Serge is a man who takes on a dare and meets challenges, but most of all he loves to run.  It is his way of feeling alive.

Over the years, he has never ceased running, either during one of adventures in different parts of the world or occasionally in competition.  What he likes most is training on the country roads around Grainville-Ymauville, where he can wave to the vehicles that pass him, admire the cows in the pastures and marvel at the light of Normandy, which enhances the landscape.  His preference is the springtime when the rapeseed is in bloom and following that when the flax blooms pale blue.  The seasons change and Serge never tires of running on his same circuits in the Seine-Maritime Department of France.

Even if he is beginning to feel his age, particularly as far as recuperation time is concerned because it longer, at age 62 Serge remains optimistic at all times and has the soul of a child, with thousands of projects and dreams in his head.  So even if a dream comes to an untimely end or cannot ever become reality, for Serge running has always been a link between dream and reality.  The road is long for he who does not follow his dreams, says Serge and he has so many dreams.  His love of adventure fuels his existence.

Following the failure of the Run & Row Tour, he put down his oars, perhaps forever, but one never knows.  There are rumors… but Serge hopes never to stop running, living and dreaming.

Serge’s team has always been at the heart of all his challenges.  There are several seasoned members on this team: René, Ludovic and Bertrand who made strong contributions to previous events but also Eliane, Daniel, Thomas B, the “Pigeons Voyageurs” and many others.  Over time and as the length of the events increased, these people became an important part of our events.  Adaptability and versatility are the two primary qualities required of a team member.

This new challenge takes place at an unusual moment.  If the Run and Row Tour had not stopped, Serge would have been in the midst of it.  That not being the case, Serge had an urgent need to bounce back with a new project.  In view of the start date, we had to mobilize the troops and the energy of all our supporters at very short  notice.  Because of her work, Laure cannot assume responsibility for the logistics of this Run Around the World but she will be a member of the support team from time to time. Nobody is indispensible so she has turned her job over to Serge’s youngest son, Thomas, who will get support from “stainless steel René”, “charismatic Bertrand” and “passionate David”.  The team has a younger look with the presence of Maxime, Serge and Laure’s nephew and Christophe alias Béli.  To our great delight we will receive visits and support from the “Pigeons Voyageurs,” the “Ouchs” and  Serge’s eldest son, Nicolas.  Let us not forget modest Zette, Serge’s sister, who is always in the background but an invaluable presence at each start.  In order to reach male/female parity, we cannot forget Monica, our favorite camerawoman, Anne our webmaster, whom we adore, and our dear Lee.

Upon our return from Run & Row Tour in June, we had to bounce back. In early summer 2015, Serge has of course taken the time to contact each of the partners, to inform them of his desire to leave on an African voyage in 2016, and whether they wished to continue their support on this new project . Some have retired, others have barely took time to think before saying yes.

Such spontaneity has impressed us, because yes, it was allowed to fail and yes, we want to support this new momentum and the continuation of the adventure we had begun to share together. Such was the message received from the Intersport Group, Fleury Michon and 8 Leclerc stores of Normandy who accompanied us last year.

From the  “simple” idea of crossing of Southern Africa, Serge finally decided to go on a world tour, informing his partners in the fall. Enthusiasm remained intact and so it is with much joy and happiness as we continue our journey in 2016 and 2017 in the company of these 3 brands.