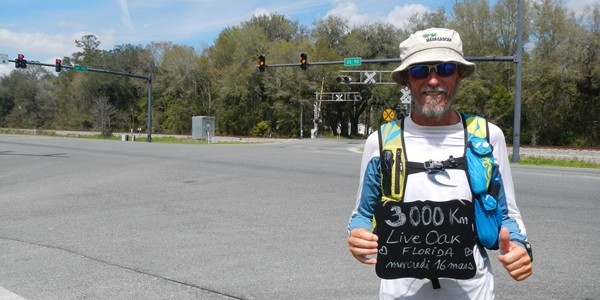 These past days it’s always the same at the start, a period of heavy perspiring, then weak legs.  And this condition  even though Serge starts out in “warm-up mode,” walking and trotting, in the hope that it will prevent this unpleasantness; but no, it’s not so.   Serge thinks that his body just has to eliminate the heat accumulated the previous day and one night is not enough.  The internal radiator of Mr. Serge seems to be stuck!  So, a swig of Coca Cola, a bit of sugar and another day starts, with two towns to cross: Lake City at km 10 and Live Oak at km 44.

In Lake City I ran errands in one of the big super markets, where bottled water is less expensive than at filling stations (up to ¼ the price) and where there are brands to choose from: distilled water, purified water and spring water, which I compare to mineral water and which is usually the most expensive.  I buy the spring water because the others tend to taste of plastic.  There is locally produced carbonated water, Perrier and San Pellegrino.  The brand for flat water is Evian.  It is only in large stores that one finds such a large selection.  Since we will not be going through large cities in the coming days, it was the time to stock up.

In Live Oak, at the junction between Lee Avenue and US 90, 3000 km were clocked.  The time for a photo and off we go.  Serge seems to have a train to catch…  I take this opportunity to say Hi to Lee, who started translating my texts into English when I arrived on American soil, just like the old days.   I find our exchanges just as pleasant and stimulating.  Thanks Lee!

Once through Live Oak, US 90 is boring and the weather is sultry, which weighs on the brain.  Then, when the train passed the smile comes back because we adore American trains, primarily freight trains, which are very long and usually blow their whistle at us when they pass.  We have time to watch them go by because they are so slow.  There are almost no passenger trains, due to the distances, and people take the plane.  The moral of the story is that a train passing can make you smile.  There is no such thing as small joys in life!

After the orange groves, the lakes and the world of horses, here we are in the midst of a nest of churches.  Church goers have a multitude to choose from and their churches are legion here.  There isn’t a street or road that does not mention a church.  There is something for Adventists, Roman Catholics and the majority is Baptist.  I have just satisfied my curiosity about the Baptists and learned that it is not a religion.  I fear I would bore you, so if the subject interests you go have a look on Internet.