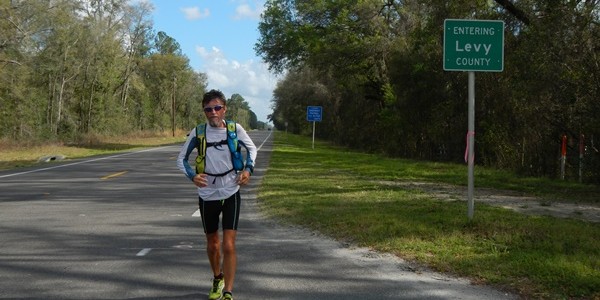 Start today on US 27, which takes us to Ocala.  The traffic is heavy toward Gainesville and I’m glad I chose to go around that city in order to reach Lake City tomorrow.  As we leave Ocala at our 20th km, we continue on US 27 North but there is a complete change of scenery.  We are in the middle of prairies and woods and there are lots of horses.  One ranch follows another and they are all very luxurious.  The stables are more like sumptuous homes than lodging for horses.  This region seems to be a sanctuary for our equine friends and we see some grazing in their pasture.

As for Serge, he had trouble recovering from a state of weakness where he perspired heavily and his legs were weak.  The situation improved at the 25th km.  It’s a long time but Serge isn’t discourages because he knows that it is only momentary and part of the game.  Several puddles remain from last night’s storm but the earth quickly absorbed it all and my car didn’t get stuck in any mud.  At Williston, km 55, Serge took a small route 41, which he did not like because he cannot see cars behind him going out to pass another car and sometimes they do not see him either.  For that reason he prefers running on the double two or three lane highways.  We are demanding and prefer divided highways.

Serge continues to drink 2 gallons of water during his run (1 gallon = 3.78 L).  He does not drink any specific energy drink because he finds that in the long run they are not easy on the intestines.  He always adds coffee to his first morning feeing (today he had a double ration of coffee and muffins) and a small bottle of Coca Cola for the last two refueling of the day.  He adds a bowl of soup at the end of the morning.  In the evening and at night he generally drinks about 1 liter of liquid: 1 beer (33cl) and the rest water.  He does not drink beer every evening.  He started drinking beer in the USA because American beer, like the coffee, is rather weak so it’s easy to enjoy.

Another day has finished normally and Serge tells me “it was unbelievable”.  What was?  This morning I didn’t bet on the time I would take to run a certain number of km!