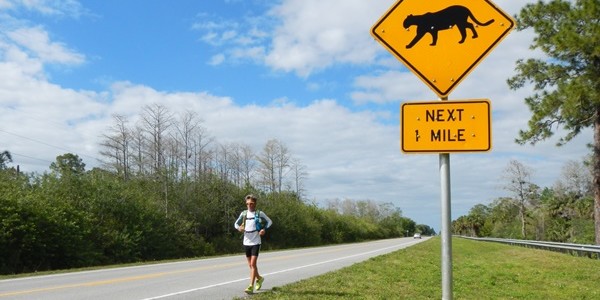 How do we choose a route and why do we take one road instead of another?  It’s a good question.  Generally speaking, we have to choose between the city, i.e. traffic, stop lights and easy access conveniences, or less populated areas, which are more comfortable for the runner but where there are fewer places to sleep and replenish supplies.  Of course, depending on the country and geography, there may not be much choice.  In Florida we could choose to head due North by US 1, along the East Coast, where there is a succession of beaches and resorts.  We chose to go through the center of the state and see the wonders of the Everglades, before heading between Orlando and Tampa in order to miss as many of the bigger cities as possible, before reaching Georgia.  I love deciphering maps and having them talk to me.  Now with Street View it’s easier to study a route and in spite of the GPS, I still use traditional maps that I can touch and contemplate at leisure without Internet.

And today we were not disappointed because Serge saw 2 panthers on the road, lots of birds and in the canal which follows the road, crocodiles.  On foot, he seems to see more things than I do from the car.

The temperature is the same as yesterday, with a stronger south-easterly wind.  On RN 29, there are shoulders and large grassy spots where I can park.  A few drivers stopped to ask if we were OK or needed help, as much for me in the vehicle as for Serge, whom one might think is alone and lost.  I have to say that there are no pedestrians on these roads and a runner is a curiosity.

After the 20th km we headed due North on a succession of straight lines which are impressive.  Aside from the crossing of US 41 and US 29, at km 20, where there is a tourist center and a service station, we crossed no village.  It is solitude that Serge and I like a lot.  Loners that we are, disconnected from information and news, we are finally in our bubble and both had time to think.  It surprises me to realize that being continually active in our day-to-day life keeps us from settling into our thoughts and reflecting on things.

I will sign off and return to my meditation before action is required at the end of the stage and where time has to be optimized in order to do everything (management of videos and photos, which takes time) and to get to bed at a decent hour.

The irony of it all is that the stage finished in a huge curve, after dozens of km in a straight line.