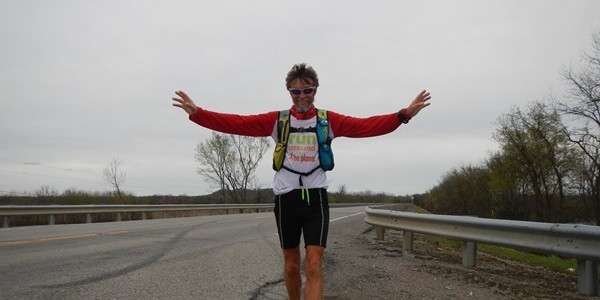 Starting a little earlier than usual this morning, because we needed almost 30 minutes to reach our starting point. We cross a very beautiful landscape today, sunny day but a very cold wind from north- west. The morning setting is beautiful, and we take full advantage.

Serge has very bad shoulders since Tenessee, but we make make the choice to follow minor roads with no lot of traffic and enjoy the countryside.

When it rains hard as was the case yesterday, Serge puts on his raincoat over his backpack to protect it of rain. But the result is a traction on Serge’s back and he has muscular pain on his back.

The day continues and the sun beats down. We cross Providence mining town where buried a time capsule in September 1990. Nothing says that it contains, but in the plate will remain buried until 2040.

Since we entered Kentucky, we find the people very friendly and serene. Yet it was our surprise to learn that all the US states, Kentucky is the most armed. With an average of 136 guns per 100 people!  But Kentucky people are very pleasant, smily and friendly more than in Tennessee.

I realize that I haven’t yet mentioned one of the emblematic figures of Kentucky State, and even the “Colonel” Sanders.

You already have almost all seen is the character that appears on all fronts of KFC (Kentucky Fried Chicken). The story of this man, who despite having had a difficult life will end with perseverance to be at the head of one of the biggest commercial successes of the country, is a real “success story” as the Americans love it.

I will not transcribe his Wikipedia page, but for those interested I suggest you to have a look.

Mid afternoon Laure support Serge and René and I go to the motel, take time for us.

Once back from the end of the stage she will tell “as fields, as cows, that firm, as silos and it was cold at the end.”

It is true that time has significantly refreshed tonight.

Serge stopped at the bridge to cross the Ohio River between Kentucky and Illinois. It is a new state that we start after the first kilometer, tomorrow.